An exhibition of and about photographs of Central Australian sites associated with intersecting stories from 1934 to 1936. Photographs by Philip Bell 2014 to 2021 on display at the Corner Gallery Stanmore from 14th May to the 30th May, 2021.

Proceeds from sales will be donated to the NPY Women’s Council, Mparntwe (Alice Springs)

Meet Mark McKenna, author of “Return to Uluru”, on Saturday 22nd May from 3pm.

Mutitjulu waterhole, Kupi Mutitjulu, lies on what I call the shady side of Uluru. Here, in 1936, Bertha (James) Strehlow (often claimed to be the first European woman to see Uluru) was nursed by local Anangu women after a miscarriage while travelling with her new husband, TGH Strehlow.

A nearby cave is the site of the murder of Anangu man, Yokununna, by Constable Bill McKinnon in 1934. Mark McKenna’s recent book ‘Return to Uluru’ re-examines this case and considers the significance of Uluru for Australia’s 20th Century cultural/political identity.

Prompted by Leni Shilton’s recent biography of Bertha James and by McKenna’s book, my installation of photographs of Uluru and Mutitjulu sites invites questions about how and for whom photographs ‘remember’, and about the significance of naming and claiming stories centred on contested sites and country.

The Mutitjulu waterhole offers no shortage of spectacular photographic opportunities; perfect for your collection of memories.

The intersection of my post-card photo of the Kupi Mitijuli waterhole with Bertha Strehlow’s intimate encounter with local women in 1936 brought together various ways of remembering place and made me re-interpret my own images, especially of the sites sacred to Anangu’s ancient cosmology.

My gratitude to Barry Hill for his superb biography of the controversial anthropologist, TGH (Ted) Strehlow, titled ‘Broken Song – TGH Strehlow and the Aboriginal Possession’. Leni Shilton who created a beautiful poem-novel about Bertha titled ‘Walking with Camels – The Story of Bertha Strehlow’. The catalogue of ‘Songlines – Tracking the Seven Sisters’ edited by Margo Neale.

The encyclopaedic exhibition was mounted at the National Museum of Australia during 2017-8. I can’t recommend highly enough Mark McKenna’s ‘Return to Uluru’, published this year. Anyone interested in the colonial history of Central Australia, especially in the significance of Ntaria (Hermannsburg), the Lutheran missionary at which TGH Strehlow and Albert Namatjira were raised, might engage with Barry Hill’s superb book. Coincidentally, Ken McGregor’s comprehensive history of Ntaria and its most famous artist, Albert Namatjira, was published this year by the Namatjira Legacy Trust – ‘The Life and Times of Albert Namatjira’. 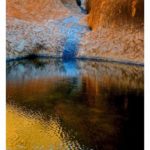 Open Fridays, Saturdays and Sundays from noon to 6pm.